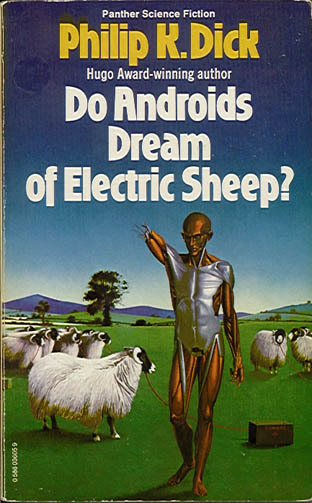 There are some androids on Earth illegally and it falls to Rick Deckard to eliminate them. That’s the basic gist of the story. He falls in love a little bit with an android named Rachel and has a strange religious experience with Wilbur Mercer. His marriage is somewhat strained and he tries like hell to get a live animal.
I had only seen the film Bladerunner a couple of times before reading this book, both years before. I had only the vaguest recollections of the movie when I started the book, but I knew that either I remembered very, very little or that the film version diverged greatly from the book. Turns out both were true. The movie seemed to take some of the characters and the basic storyline, and that’s where the similarities end, leaving a good book behind and making an equally good movie.
Enough about the film though. I have decided to name my next pet Isidore, I liked him so much. He was one of my favorite characters and I wanted to hug him again and again throughout. The bit where he’s trying to fix the ailing cat not realizing it’s a real cat instead of an electric one is so endearing. There’re just too many such moments with him; I love it.
I wasn’t prepared for a Deckard who was so fixated on animals. True, most everyone is in this story, because true living animals are so rare, but this man was near obsessed, keeping a copy of Sidney’s Price Guide in his pocket at all times. Of course, a man as stressed as he had to have some quirks.
The Mercerism parts of the book proved to be the most confusing parts. I couldn’t tell whether the author was ridiculing or praising religious experiences. Either way, Deckard was far more confused by his experience with Mercer than I was, poor fellow.
This book is terrific. As I said, if you’ve already seen the movie, it’s not exactly or even nearly the same. Just treat them as two separate entities and you’ll get the most out of it you can. It’s great and I recommend it to anyone who likes hardcore science fiction.