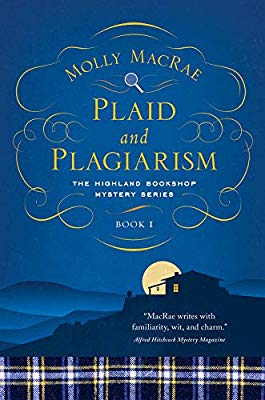 After her divorce to Curtis the rat, Janet and her friends pick up from Illinois and move to Scotland to run a bookshop. Before she is able to move into her house (which had been rented out in her absence) someone is killed in the garden shed. Janet, Christine, Tallie (Janet’s daughter), and Summer investigate the murder that literally happened in their own backyard and maybe along the way they’ll find out who has been leaving trash inside the house. Perhaps the two mysteries are related.

This first book in the Highland Bookshop series gives a good introduction to Janet, but less so to the other women. I really wish this book gave me a greater insight into Tallie and Summer, especially. The dual mystery certainly kept me guessing, but the character work was lacking. Further complicating my enjoyment of the book was the fact that I didn’t like Janet. It sort of detracts from the coziness of a cozy mystery if the lead is unlikable. Perhaps I should try one of MacRae’s other mystery series instead.