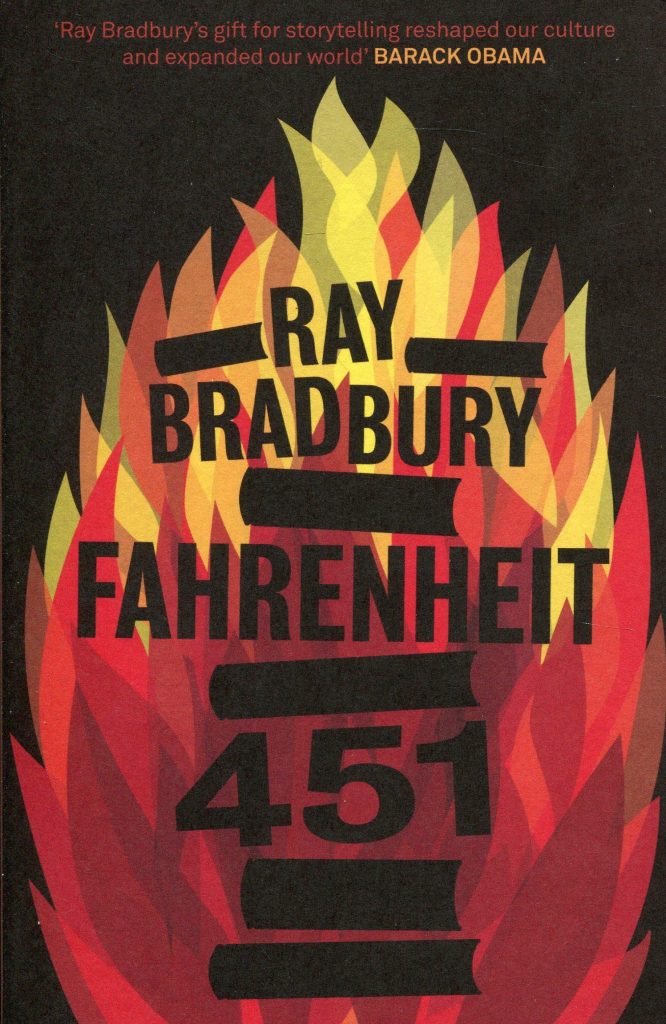 At heart, this review concerns a book about books.  More, it is about the necessity for books.  The basic plot of the book is about the authoritarian banning and burning of books.  The origins of “Fahrenheit 451” were written on a typewriter in the basement of UCLA’s Powell Library.  A 1947 short story “Bright Phoenix” and 1951’s “The Pedestrian” were combined into the novella “The Fireman”.  At 25,000 words it was written in just nine days.  This was expanded into “Fahrenheit 451” and published in 1953.

The story is about a fireman named Montag.  A fireman is not a man who protects you, your house or your books from fire, but burns them himself.  The government has decreed that no one may read books.  Montag’s wife, Mildred, is addicted to pills and the reality shows on her living room walls.  Think 50 inch flat screens.   Montag wants to know what is in the books he burns.  He acquires a cache of books which is revealed.  In order to escape, he seeks help from a former English professor named Faber.  The professor leads him to a group of exiles who memorize books so that the essential thought of mankind can be preserved from the nuclear holocaust that has been unleashed.

“Fahrenheit 451” was both banned and censored.  The story has been released in many formats, including audiobook and e-book versions.  It can be found in radio, television and movie forms.  Bradbury also adapted the book into a play which differs in many respects.  It has become a graphic novel and video game.  However you come to the book, if you value your ability to read and think freely, I think you will love it as much as I do. There is a reason it is number seven on the New York Library list of “Top Check Outs of All Time”.