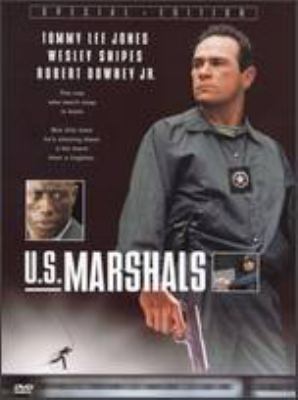 This film opens up with a figure in a trench coat shooting at two other figures. Later, we see truck driver Mark Warren (Wesley Snipes) in an accident and while saving him, a gun is found under his seat. After finger printing, it is found that he is none other than federal fugitive Mark Roberts who is wanted for a double homicide.

Mark is then placed on a prisoner transport aircraft with U.S. Deputy Marshal Samuel Gerard (Tommy Lee Jones). During the flight a Chinese prisoner uses an improvised weapon to attack Roberts/Warren but he misses and blows out a window in the plane, thus depressurizing it. The plane wrecks in the Ohio river in Southern Illinois. While Gerard tries to save the surviving passengers on the plane, Warren escapes.

Later we find everyone in New York City. Roberts is trying to figure out who framed him for being a “mole”. Turns out that he is a former C.I.A. operative that supposedly went “rogue” during a botched deal. Gerard and the others have found evidence that is pointing to his innocence and that he had acted in self-defense during the shootings. Action and drama continue to heat up throughout the movie as the Chinese, C.I.A., and the “mole,” who set him up, are all after him.

Although not directly a sequel per se to The Fugitive, this was a different story with the same main characters, the U.S. Marshals that teamed up with Gerard in The Fugitive. I enjoyed this movie but it wasn’t as easy for me to follow and become as involved with the character Roberts as I had with (Harrison Ford) Dr. Richard Kimble in the first movie. First of all, Snipes’ character, though innocent, was a trained killer and was smoother than Harrison Ford’s character at running/escaping. This had additional drama to the first movie. Dr. Kimble, though smart, seemed just more panicking while trying to survive. I just found myself getting behind Ford’s character. Being in the moment, accused of his wife’s death also added more of an emotional element, I felt. I enjoyed the storyline better. Tommy Lee Jones played his character well but just not as intense as he was in the first movie. Snipes was good but I just saw him more as an action figure that was used to being pursued. Also, the plane transport scene reminded me so much of the bus scene in the first movie that it didn’t seem very “original.”