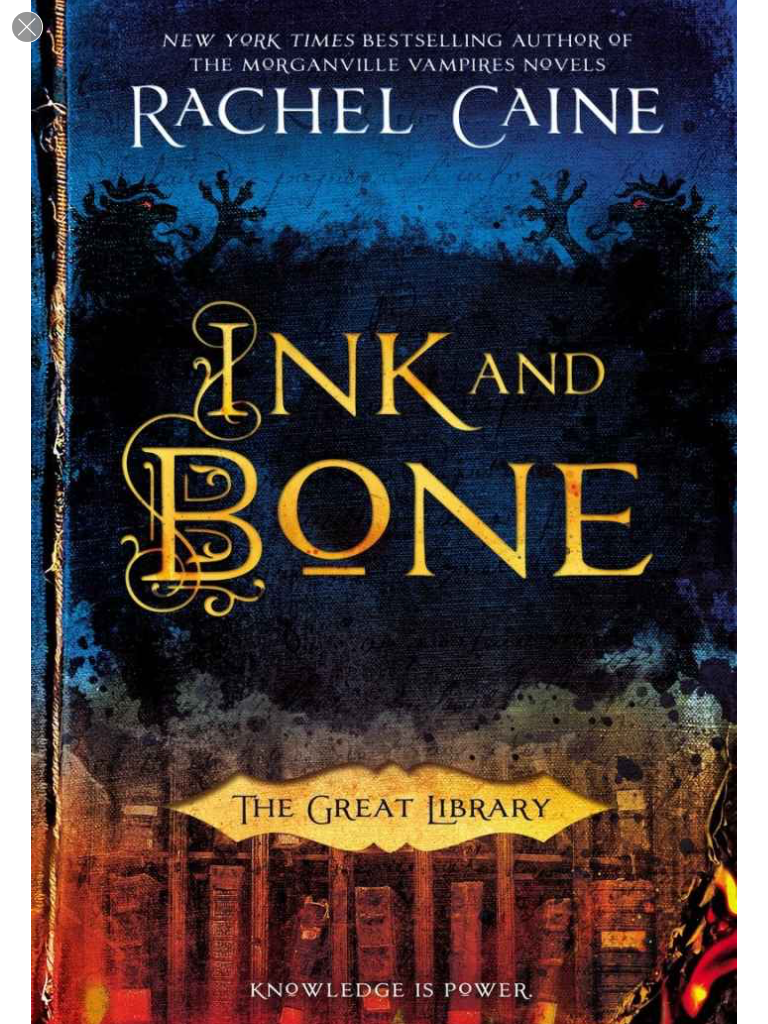 By: Rachel Caine
 
Hear Ye, Hear Ye, Read All About It!! WOW, loved this book. Set in the year 2025 but reads like it was set in the times of the great philosophers and authors. The power of books (to include knowledge) leads the plot to a scary scenario of hoarding all the original works and personal diaries for the good of mankind. Rrriigghhtt!
To work for the Library was an esteemed and altruistic goal. To supposedly protect every written word so that the public could have access as requested or needed seemed to be a lofty calling. But as most of us know, “hoarding” is not always a good thing and not every law or rule is for everyone’s benefit. So Jess finds out.
In this period, even owning a real book is illegal. The library has become a country into itself and if you pass the examinations and are offered a position in the organization you must give up all your loyalties to your own country.
This “hoarding”, for lack of a better word, creates criminals of many countries’ citizens. There are “runners” who are essentially black market thieves that steal and sell original works of prose. There are “burners” who are dissidents that will destroy literary works just to prove a point to the Library authorities, and there are Ink lickers who are so obsessed with original works and the feel of actual paper and ink they will consume the books or try to hide them for themselves. (OK, little over the top for me but does work in this alternative world!)
This book is quite unique in it’s story and setting. You feel like you are living in ancient times but the plot is easily felt as a futuristic science fiction setting. I loved the main theme of a “government” like organization that wants to control all knowledge and the naive new recruits discovering that all is not as they imagined in their new “calling”. It includes a little something from most of my favorite books. There is danger, violence, friendship, twists and a smattering of romance included along with the intriguing plot. The paranormal aspect comes in the hierarchy of the Library’s Obscurists and their use of alchemy so if you are thinking were’s, witches and vamps this is not that kind of read. But it is fabulously penned and well worth the journey. I am sure some might say it is a little incongruous but look past some of the confusion of the setting and open your mind to something that might (someday!) resemble a little of our own society. (You just have to read between the lines!).
I rarely give 5 stars but ….. 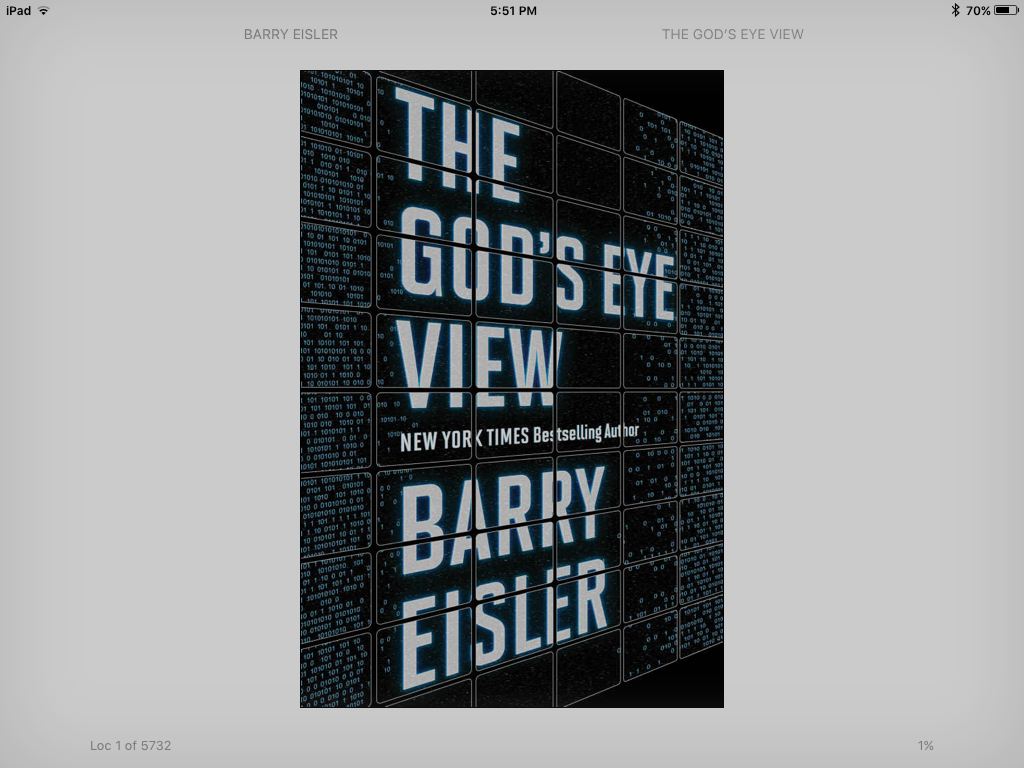 “The God’s Eye View”
By: Barry Eisler
We would only hope that this book is in reality a science fiction/thriller novel! But..it is hard not to relate this story with present day actives/situations we hear about every day on many of our own electronic devices and the mainstream media. SHIVER! A frightening, eye opening and realistic account of the capabilities and culpability that all our new technology has afforded us. Paranoid much? After reading this you will find yourself looking for camera’s, worrying about your computers browsing history and questioning all the space missions we think are generic and for research. I know it is not the usual paranormal fantasy thriller we review on this site but I strongly feel this book should be one in your library. I think I would much rather deal with a vamp, witch or shifter than try to fight against this global “know it all”.
“Visions of Snowden dancing in your head” … just imagine if you had come across something in your job as a surveillance technician that went against every marginally ethical bone in your body! Knowing you may hold a key to the government’s power and control, all disguised under the heading of “homeland security”, what would you do? How do you keep yourself out of the line of fire? Can you live with yourself if you do? Can you live period? Will they let you? All the questions the main character Evelyn Gallagher had to ask herself.
I read this story every free minute I had because the characters and storyline flowed easily, was very believable and has you on the edge of your seat from the very beginning. At first I questioned the episodes of erotic scenes included in this read but realized that even their intense moments added to the story about the boundaries people set for themselves.
Blake Crouch”s (author of Wayward Pines) endorsement statement read “…The God’s Eye View is one of the most important books that will be published this year.” I concur.
Please, give this a chance. You never know what you might learn! 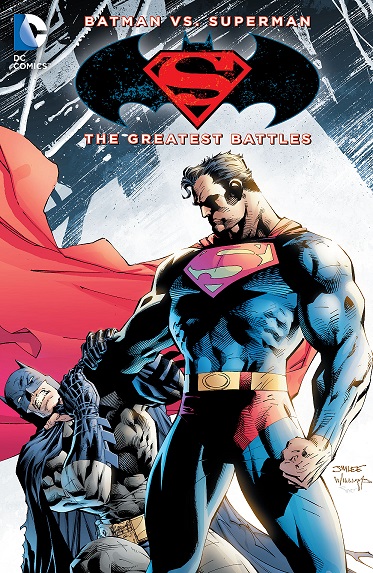 Batman vs. Superman contains excerpts from six different comics stories that features Superman and Batman going toe-to-toe. These range from comics from the 1980s through 2011. Note: the book is not a tie-in to the recent film Batman v. Superman, and doesn’t serve as any sort of inspiration for the movie either, as far as I can tell. My favorite, hands down, was “Who Would Win” from Superman/Batman #78 (2011). Two kids argue about who would win in a fight, the way so many kids have throughout the decades, I’m sure. At the end, we see that Batman and Superman have been observing the conversation and Batman asserts that he would totally win. It’s adorable and reminds me of an excellent episode of Batman: The Animated Series called “Legends of the Dark Knight” in which a group of kids all tell their version of what they heard Batman is really like.
The longest and final excerpt is from issue four of The Dark Knight, called “The Dark Knight Falls.” Okay, I know that The Dark Knight, published in 1986, is considered a classic of the Batman legacy and as such it’s no surprise it’s included in this anthology. However, it takes place in an alternate universe future and I found it hard to follow, jumping in at #4 as we do in this book. It’s such a dense story in the first place, that it really requires all available background information (ie. issues 1-3) in order to truly understand what’s going on here and why. The other stories in this anthology did not have that problem: some were clearly part of a larger story, but not to the extent that reading an excerpt is confusing. I had to re-read several sections from “The Dark Knight Falls” just to keep up.
On the whole, I really enjoyed this anthology. It’s a great introduction to the characters and a good spotlight on how they differ and use those differences to work together, ultimately.
Review by Jessica A. 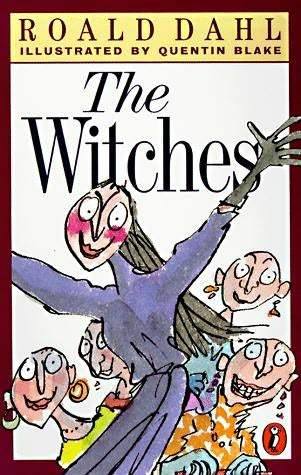 What do you do when a childhood fear comes to life, why you fight in of course? When a little boy (whose name we never learn) is told stories by hos grandmamma about witch being real, he never quite believes her until he is trapped in a room with 100 witches plotting to destroy all of the children in England. Somehow, despite the fact that they find him and turn him into a mouse, he manages to escape, make a plan to stop their plan and succeed in becoming the hero.
Review by Leslie B. 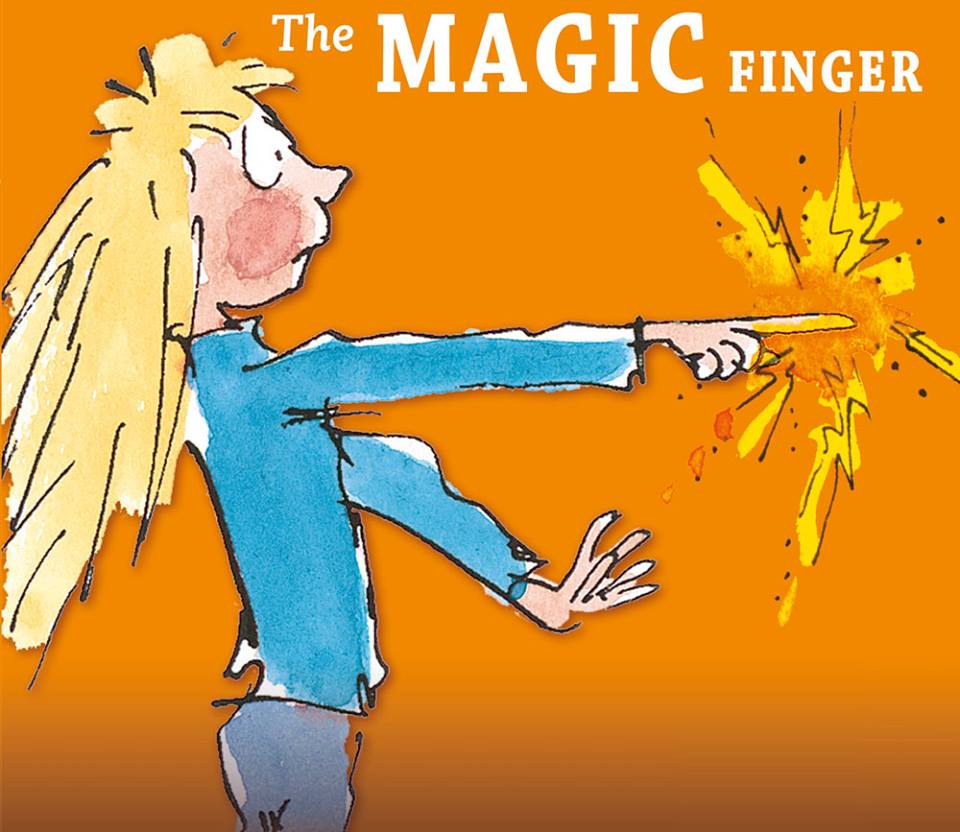 The Magic Finger
By Roald Dahl
With great power comes great responsibility. Or so the young lady in this book found out when she got mad and turned her neighbors into tiny people with duck wings. The Greggs were hunters who loved to hunt for sport alone, and when they killed 16 ducks without a tear, the girl (she is given no other name), curses them and switches their lot with the parents of the ducks they killed. The ducks grew big, had people arms, and went hunting the Greggs. What happened next? Read the book and find out!
Review by Leslie B. 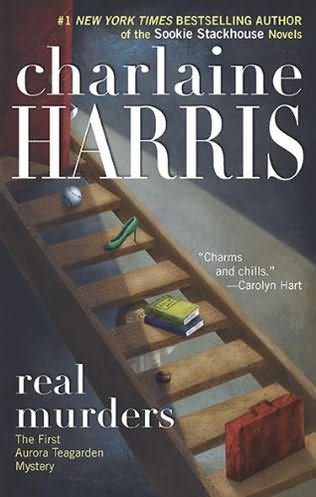 This book is the first in the Aurora Teagarden mysteries, a series about a small-town Southern librarian who is a member of a group that discusses true crimes: Real Murders. But what happens to the group when members start to be killed off, in the same manner as famous murders that they discuss in their meetings? I appreciate that the killer was not the obvious red herring. Though, I still had my money on someone else. Oh, well. That’s why I’m not a detective. Or a writer. On the whole, it was an entertaining book and a quick read, but I wasn’t swept away. Charlaine Harris’ approach to race was a bit problematic, and I’d be remiss in not mentioning it, mostly because she tended to sweep it under the rug herself. There was only one person of color in the story and most, if not all, of his dialog occurred “off-camera,” as though the author found writing a black man a little too complicated and decided to skip that bit. I come to this conclusion because there is a bit where Aurora talks about a local mayoral race and says that it’s a good thing that none of the candidates are black this year, since that always complicates matters. Yeahhhh. To give the author the benefit of the doubt, the book was written 26 years ago, and her more recent books, like the Southern Vampire series (TV’s True Blood), are far less problematic. She’s grown as a writer since Real Murders. While I probably won’t read another of Aurora’s adventures, I am reminded that I’m far behind in Harris’ vampire series, so I’ll be looking into that again soon.
P.S. There’s apparently a Hallmark movie adaptation of this book, so maybe have a look at that too.
Review by Jessica A.