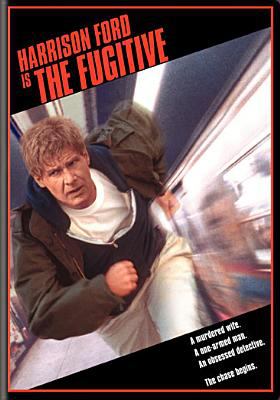 (The Fugitive is based on a tv show in the 60’s as well as a real-life murder mystery.)

Dr. Richard Kimball (Harrison Ford) has been accused of killing his wife and has been given the death penalty. He escapes a bus crash when he is being transferred to another prison. He is on a mission to find the real killer; however, he is being chased by a group of US Marshals led by senior Marshal Samuel Gerard (Tommy Lee Jones). During the chase, Kimball runs into Gerard and he claims his innocence and leaves breadcrumbs/evidence that can clear his name as he is trying to find a one-armed man with a prosthetic device that he had found in his home the night of his wife’s murder.

In trying to clear his name, he finds his way to Cook County hospital and checks out the prosthetic department. He is disguised as a janitor. While there, he saves a young child by forging his name to the boy’s chart. This action alerts hospital employees and Gerard as to his identity and whereabouts. This is strange behavior for a fugitive Gerard surmises. (He has helped others medically throughout the movie, instead of running.)

Upon returning to the hospital that he once was employed; he finds other evidence that would be motive for his wife’s murder. Eventually he figures out who attacked him and recognizes the killer in a photo along with someone familiar to him. As Kimball pieces together who may have hired someone to kill his wife, he finds that the murderer maybe someone closer to him than he thinks.

The reason I give this movie four stars is because I LOVE thrillers! I enjoy how things fall into place in this movie. It’s pretty intense! Harrison Ford is excellent in his portrayal of an innocent fugitive on the run. Tommy Lee Jones is equally as intense in this movie. I love crime/mystery dramas where the bad guy “gets it” in the end.