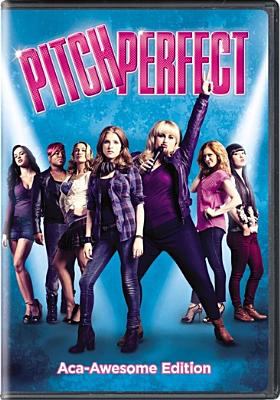 ICCA finals season is here and the Barden University’s acapella groups, both men and women’s, are in the final competition at Lincoln Center. On their final performance, a nervous member, Aubrey Posen ends up vomiting into the audience thus ruining their chances of winning.

Months later, during senior year, Aubrey and co-leader of the group Chloe Beale must find new replacement singers to their group at a college activity fair. They are struggling to find young women to sign up due to their embarrassing showing at the last performance and also due to the very conservative approach to the group in general. They are approached by several young women who don’t fit the profile of the young women that have joined in the past, that being hot young women who are all uniform looking. One of these young women is Beca Mitchell. She really doesn’t wish to be in a group or become involved in extra-curricular activity at all. She doesn’t wish to even go to college, she just wishes to become a music director and get her music out into the mainstream. It is her father, who is a professor who works at the college, who has given her an ultimatum to find an activity that she likes and stay in school…but if she can’t after giving it her best shot, he will help pay for her to go to L.A. and live the life that she is wishing to.

She then decides to try out for the Barden Bella group, after Chloe had approached her in the showers once having heard her sing in there. Beca, along with a bunch of other young women are accepted into the group. They do NOT fit the previous mold well! Individually, each woman has something/talent(s) to contribute they just aren’t cohesive as a group. Hilarity ensues as exasperated Aubrey and Chloe try to find their “sound,” and make it back to the ICCA finals without being made out to be the laughing stock of the acapella world.

During the show, there is co-mingling with other groups and individuals. For example, Beca and another character find themselves in relationships with young men from a rival acapella group at their school even though this is against Aubrey’s strict rules. Throughout, Beca, and the others feel that the older more traditional rules and expectations of the group can be changed to modernize the group in general; this however goes against what a well-meaning Aubrey thinks is best. Aubrey comes from a very strict military-type family who believes that the way things have always been done is still the right way to do things and proves very difficult to change.

Beca, is a bit of a loose cannon and initially fights her new found relationships as well as her father throughout the movie. She had always kept people at a distance in order from getting hurt but she soon discovers that that may not be the best. The group eventually becomes more cohesive and find that they have a strong chance of making it back to the ICCA finals but with warring opinions, even in their own group, that maybe difficult to do.

This was a cute and entertaining movie. My husband and I particularly enjoyed the music. Elizabeth Banks (co-producer) and John Michael Higgins were the HILARIOUS commentator duo throughout the movie! It was nice to see how the characters matured and grew throughout. The cast was made up of talented Broadway actors, comedians, and singers that helped round out this movie.