Area schools are back in session! Today’s Friday Reads focuses on books featuring student’s experiences at the start of the school year. Find a book that matches your experience, or explore looking at things from other student’s points of view! 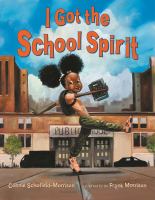 I got the school spirit / Connie Schofield-Morrison ; illustrated by Frank Morrison.

As a new school year begins, a young girl is filled with school spirit as she zips her book bag shut, rides the bus, enjoys her classes, and eagerly anticipates the next day. 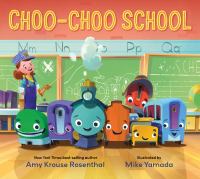 Choo-choo school / Amy Krouse Rosenthal ; illustrated by Mike Yamada.
No racing in the haul-ways! From author Amy Krouse Rosenthal, a look at seven adorable train cars on their first day of school. All aboard the train-car pool! A new lineup of students is off and rolling to Choo-Choo School. After reciting their classroom rules — Work hard, play fair, be kind — it’s time for some math to get the wheels turning. Then everyone’s ready to climb a hill in gym (it’s good to blow off steam), sing songs in music (Flat Car is a bit off-key), and learn the whole alphabet, especially the letter R. In one of Amy Krouse Rosenthal’s last books, lighthearted verse portrays a world where train stations are classrooms, the conductor doubles as the teacher, and Boxcar is happy to hand out tissues to anyone who ah-choo-choos. Bright, energetic illustrations by animation artist Mike Yamada bring the whole clickety crew to rollicking life.

Stella Díaz dreams big / Angela Dominguez.
“Stella is happy as a clam in fourth grade. She’s the president of the Sea Musketeers conservation club, she starts taking swim lessons, and she joins a new art club at school. But as her schedule fills up, school gets harder, too. Suddenly the tides have turned, and she is way too busy!”–Provided by publisher.

Wes Henderson has the best style in sixth grade. That–and hanging out with his crew (his best friends since little-kid days) and playing video games–is what he wants to be thinking about at the start of the school year, not the protests his parents are always dragging him to. But when a real estate developer makes an offer to buy Kensington Oaks, the neighborhood Wes has lived his whole life, everything changes. The grownups are supposed to have all the answers, but all they’re doing is arguing. Even Wes’s best friends are fighting. And some of them may be moving. Wes isn’t about to give up the only home he’s ever known. Wes has always been good at puzzles, and he knows there has to be a missing piece that will solve this puzzle and save the Oaks.

When Tessa is accepted into the creative writing program of a prestigious art school, she’s excited to finally let her stories shine. Fortunately, her friend Caroline has a solution: Tessa just needs to find some inspiration in a real-life love story of her own. And she’s ready with a list of romance novel-inspired steps to a happily ever after. Nico, the brooding artist who looks like he walked out of one of Tessa’s stories, is cast as the perfect Prince Charming. But as Tessa checks each item off Caroline’s list, she gets further and further away from herself. She risks losing everything she cares about–including the surprising bond she develops with sweet Sam, who lives across the street. She’s well on her way to having her own real-life love story, but is it the one she wants, after all?

A new school promises a fresh start for Sydney Williams. Except Eaganville is ruled with an iron fist by a speech team that embodies the most extreme winner-takes-all philosophy. Sydney is befriended by a group of fellow misfits, each of whom has been personally victimized by the speech team. It turns out Sydney is the perfect plant to take down the speech team from within. With the help of her co-conspirators, Sydney throws herself into making Nationals in speech, where she will be poised to topple the corrupt regime. But what happens when Sydney realizes that winning at speech might just be her ticket out of a life of loserdom. Can she really walk away from that?