So this is rare for me but I rate this new picture book as 5 out of 5. Wild Symphony by Dan Brown is engaging on so many levels. First there are the fun illustrations by Susan Batori of all the different animals. The poetry is light and catchy. A unique twist from the main character is the addition of a hidden game within the pages. These things make this a book I would recommend to children and parents looking for a book with animals that utilizes pre-literacy skills as well as a challenge for older readers. Then the author adds “a secret lesson just for you.” Each page gives words of wisdom that kids of all ages can appreciate (even big ones). With all of those great touches, my favorite part of this whole book is actually the QR code found on the first page. This code allows the reader if they have a smart phone to download a free app. For those who don’t have a smart phone no worries just head to the webpage wildsymphony.com. I downloaded the free app and learned that Dan Brown renowned author of The Da Vinci Code and others is also a musician who plays the piano every day.  With the Wild Symphony app you can listen to symphony pieces for each animal using on your phone. It’s the icing on the cake.  Interactive beautiful music, funny, wise animal characters and a secret game made this a book that I read over and over. 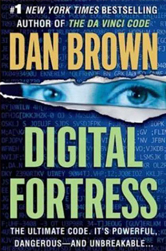 This book, though published in 1998, still holds up with the computer problems of today. In this novel, the United States government has a super computer that is used to break computer codes to keep the world safe for democracy. The computer is highly controversial and therefore kept secret from the world. The computer can decode any encrypted computer message and read private documents and emails. Though the governmental department prides itself on only doing so for the sake of the country, many believe that the government has been given too much power and wonder who will police the police? This belief starts a day of computer viruses, lies, and murder to make the government go public with the existence of the computer. Though some of the computer technology is old fashioned in our modern times, the fear of computer power is still quite real.