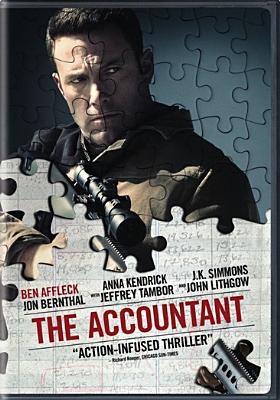 Christian Wolff (Ben Affleck) plays a high functioning autistic accountant in Plainfield, Illinois. However, he is not your average accountant. He works for criminal organizations. He is known as the “accountant” by Ray Kimble (J.K. Simmons). Ray is the director of FinCen, financial crime enforcement network, and he wishes to find out “the accountant’s” identity before he retires. In doing this he blackmails a talented analyst by the name of Marybeth Medina who has insisted on staying under the radar due to a shady past. Marybeth has always had respect for Ray’s “ability” to solve some of FinCen’s hardest cases. Ray is bent on also finding the “accountant” for personal reasons.

The movie started out with the viewer learning about Christian’s past. His parents take him to an institute to figure out how to work with Christian’s disorder. Christian’s mom wishes to have the institute’s leader to work with him but his father wants him to toughen his son up because he believes his son needs to be able to live in the “real world” without assistance. With his brief visit to the institute Christian meets the institute’s daughter Justine. His mother eventually leaves the family because she can’t handle Christian’s autistic fits. So his father is left to raise him and his brother Braxton. Being that his father is military, he uses different methods to work with Christian and to keep him from being bullied. He does this by having him learn hardcore martial arts. Plus, we find throughout the movie that Christian uses loud music, erratic lights, and rolling a hard wood dowel over his legs to help calm him when he is stressed.

Christian finds his jobs by a voice recording who calls him “dreamboat.” The recording learns that FinCen is after Christian and that he had better play it safe with his newest job. He is hired by the CEO of Living Robotics to audit their books. Their accountant Dana Cummings (Anna Kendrick) finds the descrepencies. Lamar, the one CEO (John Lithgow) fires Christian because he is “distraught” over the apparent “suicide” by his long-term diabetic friend who “supposedly” was responsible for the theft of millions from the company. (Quotations are a different hint as to more going on than what’s on the surface.) Since Christian’s autistic personality is stressed when he doesn’t finish a task, he continues to investigate Living Robotics. While doing so, he finds there is more than meets the eye. Christian and Dana’s lives are threatened the more they look into the company. While protecting Dana and other friends from assassins, he starts to become smitten with Dana. When he saves Dana from a would-be attack, Dana realizes that Christian is not who he says.

This movie was INTENSE!! The movie ties in all the loose ends nicely and has a LOT of surprises throughout that the viewer is not expecting. I generally do not like a lot of violence, I found myself so engrossed in the movie that it didn’t bother me as much because it worked into the storyline well.