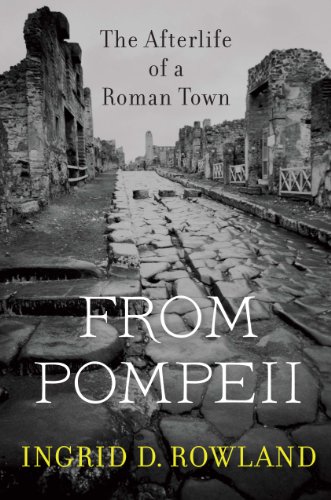 This book follows first impressions, stories about, and lasting feelings of those visiting the town of Pompeii, which was destroyed by a volcanic eruption in 79A.D. Some of these tourists included the likes of: Mozart, Freud, Hirochito, Renoir, Freud, Dickens, Twain, and Ingrid Bergman, to name a few. (Followed stories of not so famous tourists from over centuries as well.)

It weaves in first-hand accounts of those who had escaped the 79A.D. eruption and those who have witnessed the volcanic eruptions since. The book touches upon what the last few moments would have been like geologically etc., as well as possible experiences from those who succumbed the devastation. Tests have been done on artifacts removed from the area to figure out how these individuals perished. (Many, thank goodness, died instantaneously…though horrific deaths.)

The author addresses what are some options to preserve the site for future generations and what has been done in the past, both good and bad. Pollution, ideas about the site, and increased tourism have also affected the area, and the site, over the centuries.

I have been interested in the Pompeii disaster since I was a child. I visited the archaeologic exhibit in Chicago when I was 8. Plus, a recent trip to the site was a definite high! (Though you never get enough time to visit and reflect.)

This book is DEFINITELY for, what I would call “Pompeii Geeks”. The author is DEFINITELY an expert! It was interesting to hear about the area and objects that I was unable to see on my vacation. Although I enjoyed the information, I had a hard time keeping focus. One chapter would delve into the day of the disaster,  the days leading up to, and shortly after…then the next chapter would be centuries later delving into personal experiences…the next, going back to day of disaster, the next was talking about obstacles to tourism and site degradation, then… Though I appreciate SOME back story on the famous tourists who visited over the years, I felt that there was maybe too much woven in and not enough information on their impressions. It was distracting enough that at times, I had forgotten what I was reading about. (Seemed more like a gossip column at some point, or an autobiography.) I would have enjoyed more pictures in a book that describes a real-life subject in such detail.