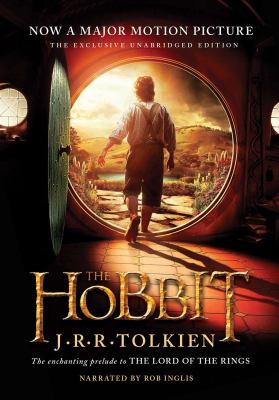 I listened to an audio version of this book that was narrated by Rob Inglis. He does a narration of each of the books in the Lord of the Rings Trilogy, which makes for a nice bit of continuity. Also he has a great voice and does the characterizations very well.

This is the story of Bilbo Baggins who joins a quest to retrieve some stolen treasure from a dragon. He is not actually a willing participant and definitely has no experience as a thief, though that is his job on this journey. The wizard Gandalf vouches for him nonetheless and of course proves to be correct in his judgement of the hobbit. The travelers go up against trolls, wolves, and woodland fairies before they even meet the dragon Smaug. It is mostly due to Gandalf’s help (and Bilbo’s) that the party makes it that far.

Now that I’ve finished the book, I think I may have all the dwarves’ names straight, but I wouldn’t count on it. I really enjoyed this story. I was unfamiliar with it on the whole, except for the bits gleaned from the Lord of the Rings Trilogy. It’s not too scary for kids (after all, all but one of the heroes survives) and it has plenty of humor. I found myself trying (and sometimes failing) to solve the riddles Bilbo and Gollum fenced at one another in the scene by Gollum’s underground pool. If you enjoy fantasy, read this, whether for the first time or for a revisit. This book is worth rereading.

Review by Jessica A. [Note: The reviewer read the book and wrote the review before the film version came out.]