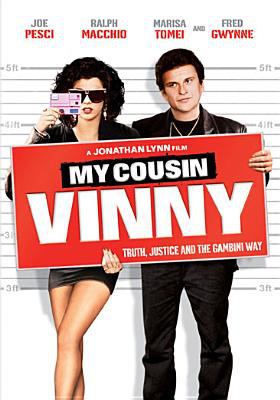 “Yo! Help!!! I have just been accused of murder!!!” Two New York college students are heading to UCLA and decide to take a trip across the United States. They find themselves in a convenience store in the south. They are arrested for what they think is not having paid for a can of tuna by accident; however, they do not realize that the store has been robbed and the store clerk gunned down. They just happen to match the description of the real perpetrators.

Although, the young men have nothing to do with the crime, they are looking at the death penalty. Billy Gambini’s (Ralph Macchio of Karate kid fame) mom hires his cousin to represent them. Vincent “Vinny” Gambini (Joe Pesci) and his fiancée Mona Lisa Vito (Marisa Tomei) come to the rescue. Although Vinny has no trial experience and has had to take the bar six times, he is still willing to take the case and do whatever it takes to convince the local judge and authorities that he knows what he is doing and that he is a legitimate attorney. Unfortunately, due to his lack of trial experience, abrasive and arrogant attitude, and total lack of respect and ignorance about basic trial etiquette, continues to anger the judge (Fred Gwynne). This, however, amuses the local DA Jim Trotter III (Lane Smith).

Throughout the movie, it becomes obvious that although Vinny doesn’t have the legal experience, he believes in the boys’ innocence. He makes up for his shortcomings with his street smarts. The same abrasive attitude that has hurt him throughout initially with the judge, does come in handy in his questioning of witnesses and cross-examination style. The District Attorney’s once airtight case now appears to have holes in it. Will it be enough to get these young men acquitted?

This movie was fun and entertaining! Throughout, it was funny to watch the banter between Pesci and Gwynne’s characters, Pesci playing a loud-mouthed New York 50’s stereotype to an elder statesman (Gwynne). Gwynne continually makes fun of Vinny’s accent and appearance, though understandably, and amusingly, so. Marisa Tomei is also a fire cracker!  She plays a loud-mouthed, New York stereo-type hair dresser that was a perfect match for Pesci. It was fun to witness their banter in throughout the movie. She is very street smart and sometimes even appears smarter and more observant about the case than Vinny does at times. Even though this is an older movie, I still watch it from time to time.