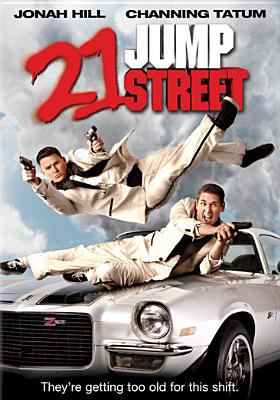 It is 2005 and polar opposite high school students Morton Schmidt (Jonah Hill) and Greg Jenko (Channing Tatum) find themselves not going to a high school dance for different reasons. Schmidt is scholarly, but socially awkward and can’t ask out girls. Jenko is the stereotypical popular dumb jock who is suspended due to poor grades. They do NOT get along well in school! Years later they meet in police academy. Jenko excels at the physical part of the training while Schmidt continues to do well at the mental part of the training. They find themselves friends at the end of the training because they rely on each other, in part, to finish.

Once out, they are dismayed to find themselves as bicycle cops having to be security for a local park. On routine patrol, they attempt to arrest several members of a motorcycle gang doing drugs. However, the arrest isn’t successful because Jenko fails to read Domingo, the group’s leader, his Miranda rights. Their supervisor, Chief Hardy (Nick Offerman) has them assigned to an undercover police agency that sends young appearing officers into schools. The group is led by an abrasive Captain Dickson (Ice Cube) who is trying to stop the spread of drugs at a local high school. Dickson assigns the young officers new identities that align with their personalities and strengths.

Jenko and Schmidt will have to live in Schmidt’s childhood home while pretending to be in high school. In order to look “cool”, the duo find themselves in the principal’s office for an altercation on their first day. An exasperated principal warns the two that if they find themselves in his office again, they will be suspended. Upon asking them their names, the two accidentally swap their bios. So now, Jenko finds himself taking AP courses, band etc., while Schmidt ends up taking the easier laid-back courses and finds himself in track.

While investigating the drug problem and source at the school, Jenko finds himself enjoying the “nerdier” classes and Schmidt enjoys the more “popular” student life. He even falls for one of the young students Molly (Brie Larson). Unfortunately for Schmidt, his new found friends are involved in the very drug problem they are investigating.  The students are also in danger trying to sell their product to a more criminal element. Conflict arises between Jenko and Schmidt throughout when they are finding themselves in opposite social circles, yet again, just like they were in high school.

The duo must be able to work together to keep the dangerous drug problem from spreading while keeping the very students that are involved safe from themselves and others.

This movie was based, on a television show from the late 80’s-early 90’s. (So, that was fun!) In fact, most of the original cast members made cameos throughout the movie. (Including Johnny Depp, Peter DeLuise, and Holly Robinson Peete). Supporting actors Dave Franco, Rob Riggle, and others made the movie FUNNY! The humor was a bit sophomoric and slapstick but it worked well in this movie. The movie was a bit predictable but enjoyable for teen audiences on up. A fun “buddy”/”bromance” film for sure.