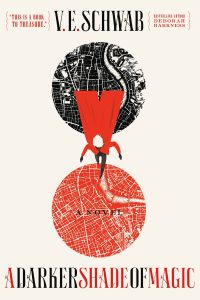 A Darker Shade of Magic is the series opener for the Shades of Magic trilogy. I was recommended this series years ago due to its setting in multiple different alternate Londons. I do love fantasy novels and London, so it’s been sitting on my to-read list for awhile.

I was slightly disappointed that none of the three Londons resemble the London that I visited closely, with the exception of the magicless Grey London, where we don’t spend much time in the familiar parts of the city. This disappointment was quelled by the other Londons being interesting in their own right. Red London is a typical fairytale city with just, beloved rulers who have a complicated family life and magic being as common as water. White London is a cruel land where magic is a dark art used by the power hungry to beat everyone below the strong into submission. There’s also a Black London, a forbidden place ravaged by out of control magic that looms in the background, but isn’t visited in the majority of the book, though I suspect that it will feature heavily in later series.

The characters are fine, but they’re also common in fantasy tropes. Our hero is a rare breed of human who can use more magic than anyone else and has the ability to easily travel between worlds. He struggles with the loneliness that comes with being one of the last of his kind. He’s joined by a street urchin who longs to be a pirate and who is teased to have hidden power of her own. They aren’t bad characters, but they aren’t characters I haven’t seen many times before.

The plot progresses in a predictable manner, the war torn White London is in tension with the peaceful Red London, supposed allies double cross the heroes, the good prince is put into mortal danger. I do like a traditional good-vs-evil story, but this one plays too closely to the rules plot wise without giving me the characters that either ooze goodness to the point you can’t help but love them (like basically the entire Fellowship of the Ring.) or the moral struggle that leads to empathy (like the relatable Edmund from the Chronicles of Narnia.). There are some shades of gray to some of the characters, particularly with Lilah (the Oliver Twist-like orphan), but I didn’t find the shades of gray to add the interest I was hoping for.

Note: I use the star system recommended by Goodreads- 3 is a book that I liked, but not loved. 4 is a book that I enjoyed very much, and quite possibly loved. 5 is “This is my new favorite book, and one of the best books I’ve ever read”. I might finish the Shades of Magic series at some point, but I’m not in a rush to do so. I have more original things on my to-read list that I’ll be reading first.

I listened to the audiobook version on Hoopla narrated by Steven Crossley. As with many narrations on Hoopla, it was a very well done production with a fantastic narrator. 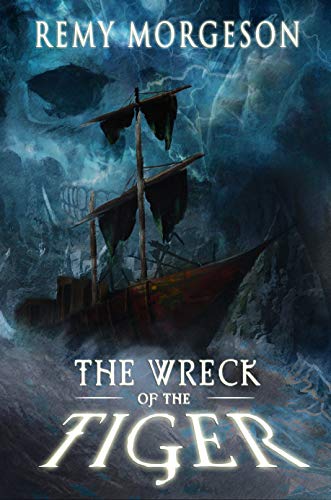 I actually work with [the author] and have read his other book Chronicles of the Bear. I like Wreck much better. I liked the combo of pirates, zombies, voodoo and temple ruin weirdness all combined. And a quick read too! 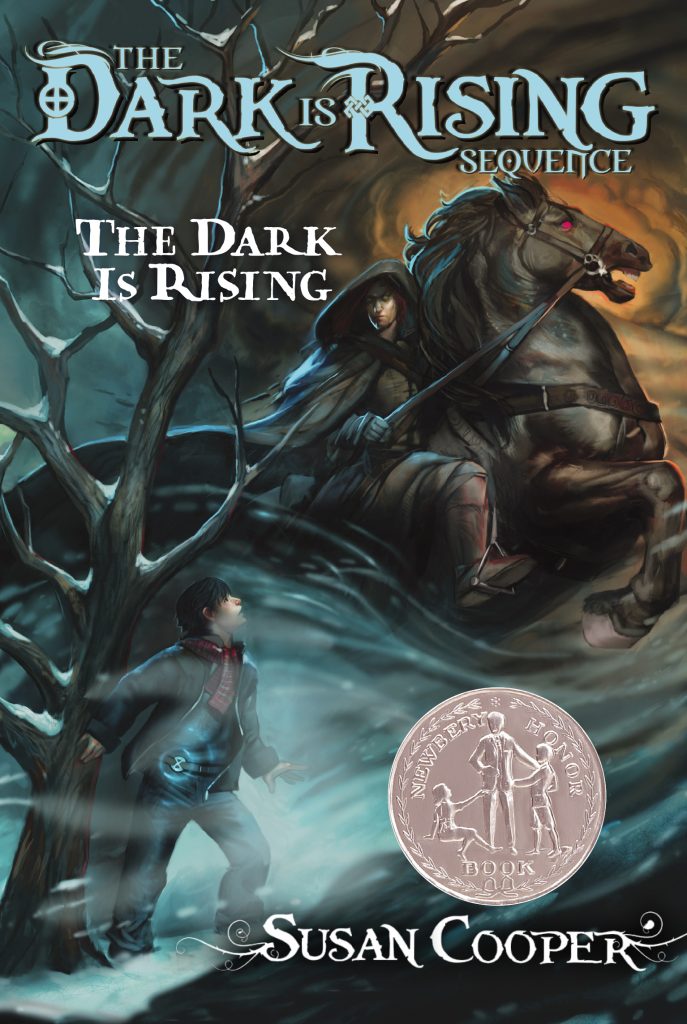 It’s the evening before Will’s eleventh birthday, and things are starting to get crazy. His beloved dogs don’t like him, the electronics malfunction when he’s near, and people he’s known all of his life are acting strangely. This book is part of the Dark is Rising series, and Will soon finds out that he’s an integral part of the final battle – between Dark and Light – for control of the world. I devoured this series in middle school and it’s just as captivating now. 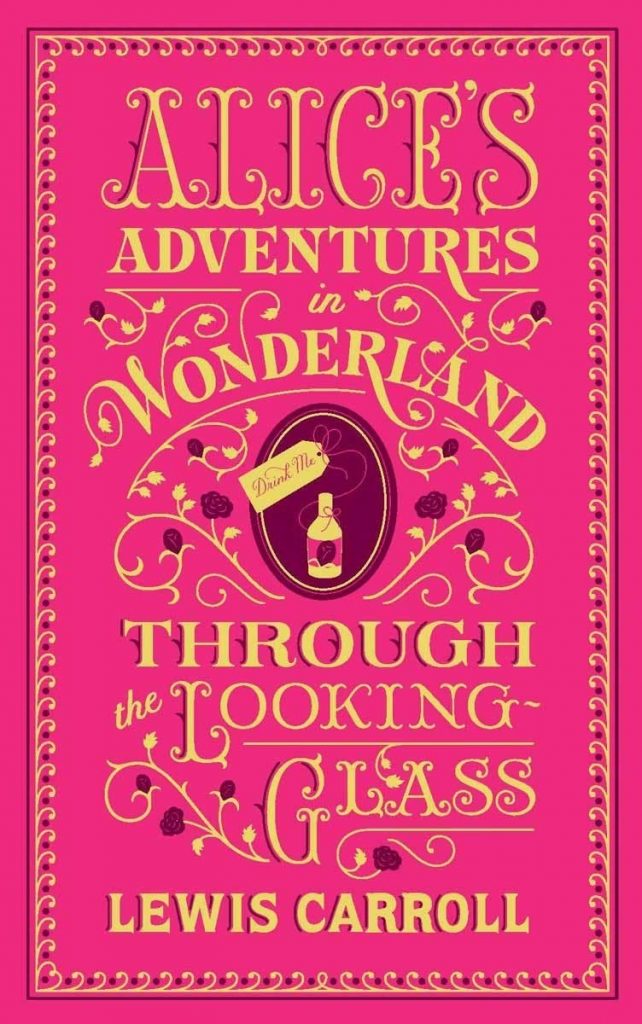 Having seen the various movie versions before ever reading the books I am surprised the movies were as good as they were with the book being so tangled. The story is vastly different from the movie and while some of the beloved characters exist the way I thought they would from my movie experience the plot jumps everywhere and creates this almost manic thread that is hard for a reader to follow. I am surprised that this is a children’s classic story. I think I would have enjoyed the zany characters and story more as a child, but having read it for the first time as an adult I was not impressed with the jumping plot. 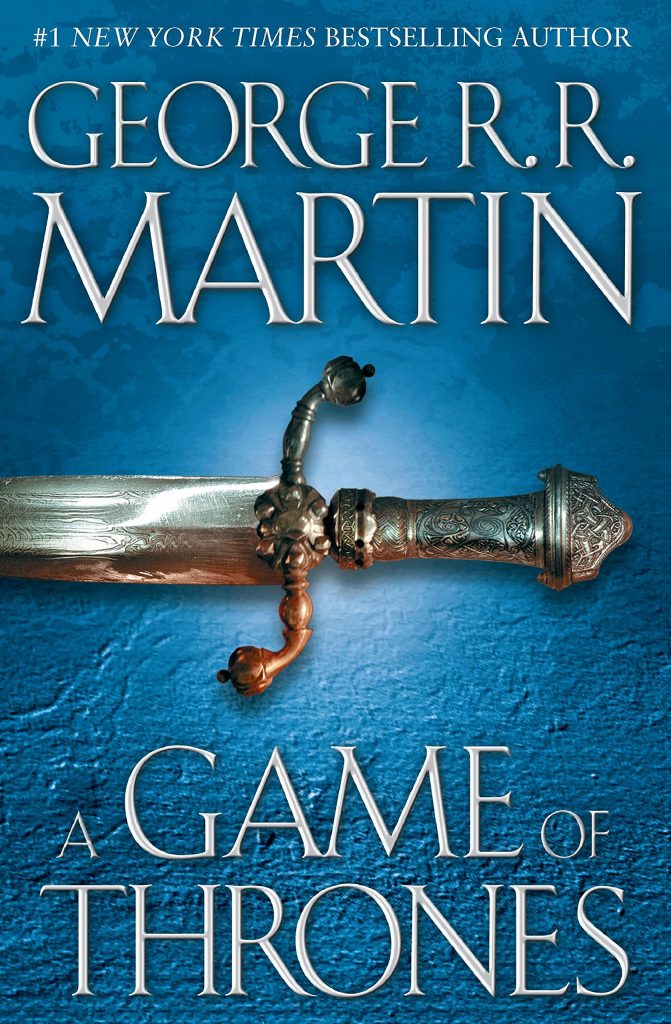 Holy smokes. Having never seen the series I went into this blind. My goal was one book then read something else then book two and read something else. I was so captured by the characters and plot I read book 1 and book 2 back to back. How BRUTAL. I love this series so far and committed to each characters story line but holy cow the violence against the children in book one was staggering. I’m hooked though. Love these. Just started book 3…. 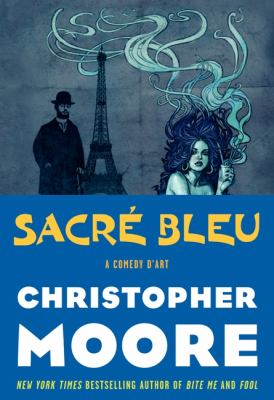 This is a book about painting in the late 19th century, but mostly about the color blue.  Blue pigment made from ultramarine was worth more than gold at one point. At the start of the book, Van Gogh dies and this news sends his friends and fellow painters in Paris into a great tumult. Two such painters, Lucien Lessard and Henri Toulouse-Lautrec decide to do a bit of investigating and learn about the connection of strange women and the color blue to several painters, themselves included. Painters lose time and occasionally paintings, though alcohol was not involved. The story takes us not only to the present (of the 1890s) but back to the previous generation of painters and even further back to painters in the Renaissance and more.

This Christopher Moore book certainly does not disappoint. It has all the traits of his previous novels: humor, history, and heart. Part of the main reason I started reading Christopher Moore was because the books were funny. They’re wacky, and quirky, and other words not ending in “ky.” I have to try not to laugh at loud while I’m reading in public. The best is that he manages to find the humor in the historical setting. Some of the jokes are anachronistic, but that’s sort of a wink to the reader and perfectly acceptable.

The historical setting is Paris (for the most part) in the late 1800s during the time of the Impressionist painters and their followers. Henri Toulouse-Lautrec is a major character and many other painters of the time also appear throughout the story. I took a couple art history classes in college where I majored in history, so I very much appreciate the accuracy of the portrayal of the time and the people. I’m not sure what it is, but Toulouse seems to steal the show in each of his scenes (and this is not exclusive to this book, because it’s true of other portrayals of him in other stories and films), something I’m sure he would be delighted to know. In any case, it’s obvious that Moore did a lot of research into his subject. The book has images of the relevant paintings throughout, which lends a sense of reality to the story: these are actual people who lived during that time. I particularly appreciate that the author provided a chapter guide available on his website for an extra bit of the history involved as well as more pictures.

The characters in this book grab the reader’s attention and affection easily. That’s the beauty of Christopher Moore’s writing style–he brings characters, both historical and fictitious, to life. We understand fully why Jane Avril pats a very drunk Henri on the head to say good-bye after leaving him in Lucien’s care, wanting to give him a little pat or a hug ourselves because by this point in the book we have grown to love Henri.

I loved this book. I highly recommend it to any fan of Christopher Moore of course, but also to those who enjoy humorous fiction (and aren’t offended by the occasional dirty joke). This book is sure to make anyone laugh and perhaps even appreciate the art and artists of the late 19th century just a bit better.