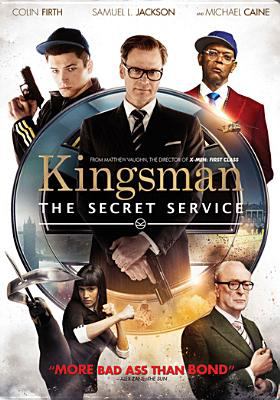 This action/spy comedy starts out with a probationary secret service agent, Lee Unwin, sacrificing his life to save Harry Hart (Colin Firth) from certain death. Hart blames himself for the death and gives the widow and his young son a medal with a phone number on the back for assistance if needed.

Years later “Eggsy,” Lee’s son, finds himself and his mom in a poor state. Eggsy’s mom has re-married a bully who abuses her and Eggsy. Eggsy is tired of the treatment that his stepfather is dishing out. We find him and his friends rough housing around in and eventually joy riding with his stepdad’s goons’ car.  Once in protective custody, Eggsy calls the number on the back of the medal. Harry Hart comes to the rescue to get Eggsy out of jail.

Eggsy and Harry find themselves talking to each other in a bar and are approached by his stepdad’s goons. They proceed to pick a fight with Harry. Harry needs no help in defending himself against the young men. After watching Harry take on these men in a seamless fashion, Eggsy finds himself intrigued with finding out more about Harry’s profession. Harry is a “Kingsman”, a spy agency that was created by the British elite after having lost heirs during WW1. A spot in the agency becomes available when agent “Lancelot” was killed trying to rescue a professor. Eggsy now becomes Harry’s student and candidate for Kingsman training.

Kingsman candidates are also wealthier candidates and Eggsy gets teased a lot due to his financial status.  Once at the training facility, candidates are put through vigorous psychological and physical tests. For example, their sleeping quarters are flooded, and the young candidates must figure out how to get out before they are drowned. They have to perform other tests to prove their worthiness and loyalty. Though no one is killed or seriously hurt during the exercises, they are led to believe the opposite.

After weeding out of several candidates, Eggsy finds himself in the position of Kingsman, although initially he was not chosen. He, Harry, Roxy (a female colleague) and Merlin need to take down evildoer Richmond Valentine (Samuel L. Jackson) who is trying to “clean up the planet” by eradicating human beings he decides are that unworthy of surviving his new world order. He implants devices into free cell phones that make people violent and kill each other. He befriends and protects dignitaries, prominent citizens, and politicians etc. from around the world from the violent deaths that he is subjecting others with. However, he places an implant device in them that causes them to explode if they cross him.

Can Eggsy and the others save the planet in time?

While this movie has disturbing violent graphics, they are cheesy and almost comical for most adults. I wouldn’t suggest this movie to a younger audience. It was a fun movie and it was cool to see how Eggsy matures throughout the movie from a thug-type character into a gentleman under the tutelage and friendship of his mentor Harry Hart. Samuel L. Jackson is also entertaining as the psychotic main antagonist.